posted by Rod on Tuesday 10 December 2019 in Features

Spend some time exploring the intoxicating world of effects pedals and you'll notice that both the commercial and DIY makers often put as nearly as much care and creativity into the graphic design of the enclosure as they do to the electronics inside. Since the broad guitar pedal categories - overdrive, fuzz, reverb, compression, distortion, chorus, and so on - often belie the many subtle (and not so subtle) variations, I think there's a degree to which audio engineers lean into the garish colors, distinctive imagery and quirky themes to help express something of the unique "personality" of each guitar pedal design. Jokes aside, I'm sure everyone puts a lot more thought into their signal chain than to how their pedalboard looks, but the attention to detail and expressive design of stompbox enclosures does make shopping for guitar pedals a little bit more fun.

As much as we might want to pretend that it's all about the sound, aesthetics are important to guitarists. Whether it's an acoustic with a warm, tobacco-colored sunburst finish and decorative inlays or a neon green flying v covered with stickers, the way your guitar looks - and maybe the way you think you look when holding it - is at least part of the charm of playing it. Just like elaborate pedal enclosures, the visual design can give you an idea of guitar's, and maybe the guitarist's, personality.

While it isn't always as evident as we'd like it to be, these ideas have been top of mind at FATpick since the beginning. We've been trying to walk a fine line: We're committed to developing literally the best possible way to interact with guitar tabs and to providing the optimal guitar practice experience. But at the same time we're confident that's something that must be discovered, not simply designed. It will take some experimentation, and maybe a little bit of humility, to fully realize. Toward that end we've been reluctant to over-invest or to over-commit to a particular design too early, preferring instead to keep the design framework simple and lightweight enough to allow for both iterative improvement and potentially radical changes.

One of the ways these values are already manifest in the application is your ability to apply different "skins" or themes to customize the FATpick experience. Nearly every aspect of the visual design - colors both in the app and during gameplay, icons, fonts, even (to a limited extent) screen layout - can be modified by the application of a different theme. This has several advantages: 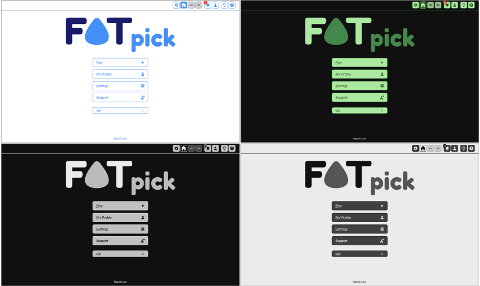 FATpick's theme can be changed from the "General" settings panel. To find it, open "Settings" (by clicking on the gear icon at the top of every screen, or, most of the time, by hitting the S key on your keyboard) and then click on the "General" menu button (or use the keyboard shortcut G to activate the menu). Simply choose a theme from the drop-down menu. The new theme takes effect immediately.

By the way, if you have any feedback or comments about the existing themes, or if you are interested in creating a personalized skin for FATpick, drop us a note via the online form or using the in-app feedback mechanism (the lightbulb icon available on every screen). We plan to support user-defined themes eventually - and it's not terribly difficult to create one - but we'd like to refine the visual design (and the themeable attributes) a bit more before "opening up" the feature to the world at large. (We wouldn't want to "break" everyone's custom themes with changes to the framework.)

FATpick is a viewer for guitar tablature that gives accuracy and timing feedback while you play along. It works with any guitar (or bass guitar, or ukulele, or other plucked string instrument) and your laptop's built-in microphone. But it also supports other input devices. So if you have one of those digital audio interface boxes you might use for recording or a 1/4” guitar jack to USB cable, those will work too.

Themes are just one of FATpick's many features. See it for yourself by downloading FATpick for Windows, OS X, and even Linux.

Also see more posts by Rod or in Features.
Or, go to the latest posts from the Liner Notes blog.