Year in Review 2020: The Song Catalog

I've been looking at FATpick's evolution over the past year — our first year, really — and pulled together some statistics you might find interesting. Since there's a lot of little tidbits to share, we'll break it up into a few blog entries. The topic of this post is the song catalog.

You can add your own songs to FATpick by importing any Guitar Pro file and, if you'd like, share those songs for others to discover and play. There's been a lot of that sharing over the past year:

And that's excluding any private (unshared) songs users have imported into their personal library.

With the custom song import, the catalog is only as limited as your imagination. But 215 songs with 851 tracks already compares very favoriably to similar apps.

FATpick's library already contains 4x more songs than Rocksmith had at launch, and 17x as many tracks. (To be fair, Rocksmith's catalog has grown substanially since then, if you include all the DLC.)

It seems that FATpick already has more than 2x the music available in Yousician today. Their official Spotify playlist — which "aims to be complete" according to their own description — includes 96 songs with just over 6 hours of total play time right now. Even if you ignore individual tracks, the more than 200 songs that FATpick users have shared so far in 2020 add up to more than 13 hours of music.

What kind of songs have users been sharing? We ran some numbers to find out.

Number of Tracks per Song

Most of the songs in FATpick have multiple tracks, each representing a different instrument (e.g. guitar vs. bass) or a different part (e.g., lead vs. rhythm guitar).

How many tracks? Let's take a look:

Here's a graph of the overall distribution: 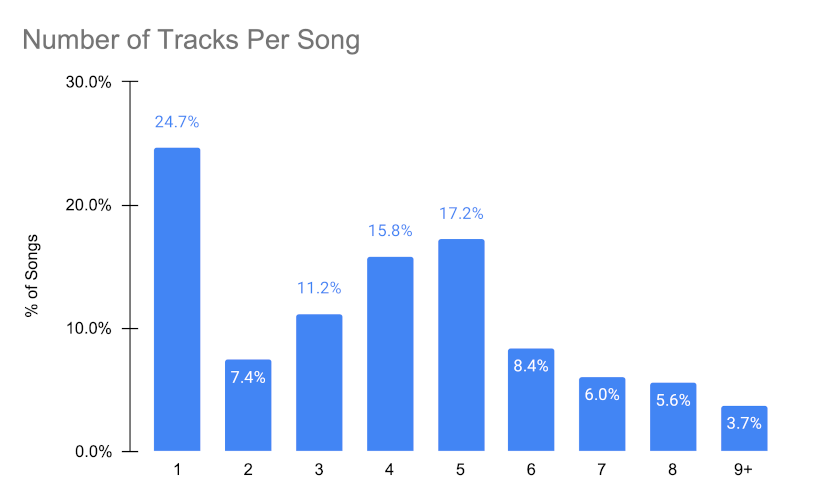 As you can see, other than the spike for single-track songs, it's essentially a “bell curve” centered around 4 or 5 tracks.

But what are those tracks, specifically?

Here's a chart showing what fraction of the songs shared this year include at least one track for a given type of instrument. 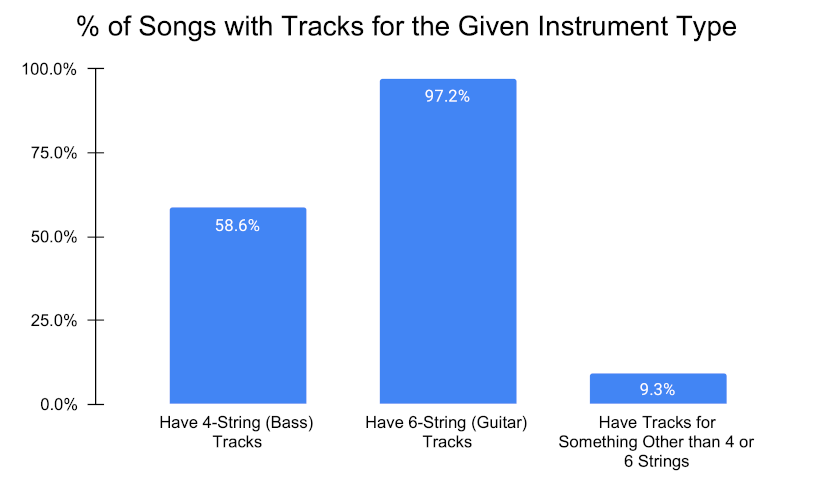 What can we see here?

Do you like superlatives? Here are some fun facts:

Here's a chart of the overall distribution of songs by duration: 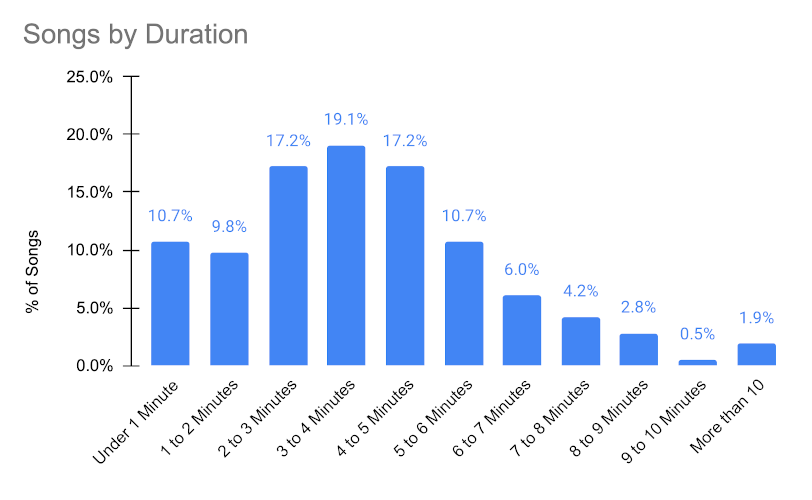 I was most surprised by the how many long songs were added to FATpick. Nearly 1 in 10 songs is more than 7 minutes long.

But most of the songs shared this year are in line with what you might expect from a typical rock song. More than half of all songs added in 2020 were between 2 and 5 minutes in length and the average play time was 3:51.

Also see more posts by Rod or tagged or Year in Review 2020.
Or, go to the latest posts from the Liner Notes blog.