posted by Courtney on Tuesday 8 June 2021 in Guitar-Tech

Spend a little time at your friendly local guitar shop or lurking in online forums and you're likely to run into a bass player with a strong opinion, one way or the other, about flatwound strings. String wind is one of those things - like using a pick vs playing fingerstyle - that bassists tend to get a little tribal about, turning their personal preference into an aesthetic decree. Real bassists do it my way. Everything else is garbage.

They aren't exactly wrong. Round wound and flat wound strings each have a distinctive sound - and feel. Like the picking versus plucking debate, there's no objectively "right" way to do it, but it's not just a question of a personal preference. The way that your strings are wound does matter.

So what are flatwound strings, and why would you want to use them?

Bass guitar strings - and most guitar strings - are a little more complex than you might think if you've never examined them closely. Only the lightest-gauge strings - like the B and high-E strings on a 6-string guitar - are a simple, single wire. Practically all other electric guitar strings use a compound construction: typically with an outer "wrap wire" wound tightly around a central "core wire". These are known as "wound strings". 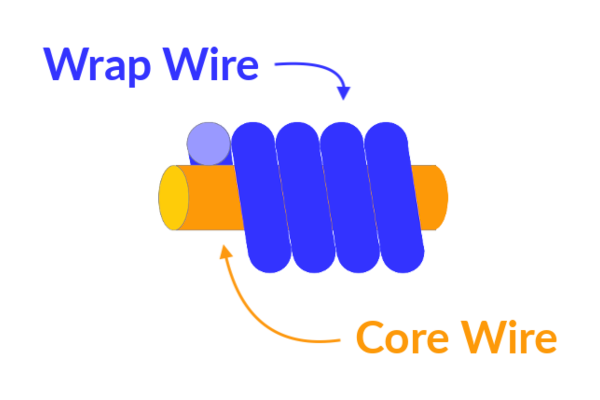 The shape of the outer wrap wire is difference between rounds and flats (and more esoteric variations like half-round and ground-round strings).

The outer (wrap) wire on roundwound strings has a circular cross-section. That is, if you were to slice your guitar string the long way - down the length of the core wire and across each coil in the wrap wire - a roundwound string would look something like this: 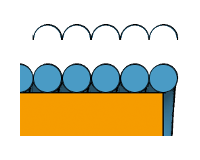 Cross-Section of a Roundwound Guitar String

The circular cross-section of the wrap wire on roundwound strings creates small bumps or ridges that you can both see and feel. Look closely at round wound string - or run your fingernail along its length - and you'll easily notice the little "valley" between each individual ply of the wrap wire. 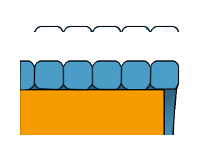 Cross-Section of a Flatwound Guitar String

If you bought your bass from a shop or online, rather than a used guitar that someone may have already customized, it almost certainly came with roundwound strings. These are by far the most common type - not least because rounds tend to be less expensive than flats - but more importantly because round wound strings are versatile, expressive, and well-suited for almost any style or genre.

For this reason it's convenient to think of rounds as a sort of generic or default string - a baseline we can use to describe the characteristics of flatwound strings.

This changes the feel of flatwound strings in a few notable ways:

Roundwound strings are characterized by a fast attack and slow decay. A firm pluck generates a crisp tone that rings out brightly.

Flatwounds are warmer and more muted in comparison. Some of the more commonly noted characteristics of the flatwound sound are:

The flowing, mellow sound of flatwound strings has made them a virtual standard for jazz guitarists, and popular with bassists across many genres.

Examples of the Flatwound Sound

So that you can hear the difference for yourself, the following video includes a head-to-head comparison between roundwound and flatwound strings. The same piece of music is played four ways: picked and plucked (fingerstyle), with round-wound and flat-wound strings.

You can use the following links to jump to specific timestamps in the video and hear the various guitar set-ups:

For more information about flatwound guitar strings and related topics, visit the following articles from FATpick and around the web.

How To Choose Guitar Strings When You Are In A Hurry - TL;DR-style summary of everything you need to know to buy guitar strings with confidence

Sweetwater: Flatwound vs. Roundwound Bass Strings - Another introduction to flat-wound strings, similar to this post. This is not an affiliate link, by the way, but Sweetwater does sell guitar strings.

GuitarAndBass.com: 9 Big Differences of Roundwound and Flatwound Strings - Listicle-style overview that's better than you might expect based on the format

The Structure of a Guitar String - Older discussion other of guitar-string construction, covering core wire shape and material in addition to wind

Also see more posts by Courtney or tagged Guitar-Tech.
Or, visit the tag index or view the latest posts from the Liner Notes blog.