As it happens the end of 2020 also marks the end of FATpick's first year in the hands of real users. We've been looking at the progress that we — and you — have made in that time. That's led to some aggregate data about how people use FATpick that we find interesting. We thought you might want to see it too. There's a lot to talk about so we're going to cover just one aspect at a time. The Year in Review tag collects them all. This post is about how people use the app.

What do users play?

Here's a list of the top 20 songs for the year, ranked by total play time.

Note that this list is not ordered by play count but by play time. That is, these songs are ranked by the total amount of time that FATpick users spent playing along with any track of the song in 2020.

This yields a slightly different ranking than one based on the number of times each song was played. But we find this listing to be more appropriate for understanding how people really use FATpick.

Play count is a bit fuzzy once you start to think about how an interactive practice tool is used by a guitarist. Notably, while working their way through a new song — or any song, really — it is common for a FATpick user to restart from the beginning, or jump back to replay a particular section, or to set up a repeat loop to practice a small part of the song over and over. Spending 20 minutes practicing a single song feels signficant for our purposes, whether you're playing it all the way through or working on specific riff or solo.

We wanted to capture which songs FATpick users are investing in. Play time is the right lens for that.

When do users play?

Most FATpick users will be familiar with the play time heat map from the "My Stats" section of the app. This is a chart that highlights — by day of week and hour of day — when you spend the most time playing songs in FATpick.

We pulled the same statistics for all users in 2020. What we discovered is that y'all are night-owls.

Tuesday night is the most popular time to play songs in FATpick, with 10 PM to 11 PM on Tuesday being the single most popular hour of the week. Thursdays at between 11 PM and midnight is a close second.

Play Time for FATpick Users, by Day of Week and Hour of Day

Like the personal heat map found in My Stats, all times on this chart are local to the specific end-user. I.e. the reported times are relative to the time-zone that the guitarist was in at the time (or at least the time zone reported by their device). If the clock on your device said "Wednesday 6:32 PM" at the time you were playing, that activity appears in the Wednesday 18:00 - 19:00 slot in the chart, no matter where you were in the world.

Overnight — roughly 1 AM to 7 AM — is, predictably, when users are least active, with 5 AM Thursday morning being the single least popular time to play a song in FATpick for 2020. More generally a lot more songs are played in the afternoon than in the morning.

True to rock-and-roll form, FATpick users seem to sleep late. The morning quiet period extends to the early afternoon on several days. To be fair it's at least equally plausible that FATpick users are up and running in the morning, just not playing guitar. I'm not sure whether this argues in favor of "sleeping in" or "just not playing guitar", but as it happens the latest start seems be on Monday and Saturday mornings. It feels like that pattern isn't entirely coincidental. And there may be a slight correlation between the most active nights being followed by the least active mornings.

The superlatives in bullet form:

How much do users play?

The total play time per user in 2020, not surprisingly, follows a power power law distribution.

Think of the "80/20 rule" that (roughly) applies in a bunch of different scenarios, maybe like "20% of the sellers on eBay are responsible for 80% of the transactions", or "20% of the songs on Spotify account for 80% of the streams". While that ratio may not be exactly right (e.g. maybe it's 90/10 or 75/25 instead) you'll often find a similar pattern whenever things are ranked by popularity or engagement.

This rule-of-thumb also describes the amount of time that users spend playing songs in FATpick. That is, there are a group of "power users" that make up a disproportionate share of the activity, and a "long tail" of users that are relatively inactive at the other end of the spectrum.

Here's how the total time spent playing songs in FATpick was distributed among users in 2020: 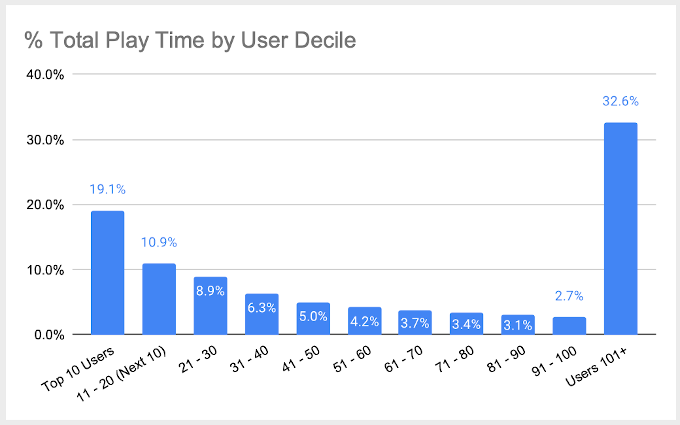 Notice that, as is often the case, this pattern is repeated at different scales like a set of Russian nesting dolls:

Also see more posts by Rod or tagged or Year in Review 2020.
Or, go to the latest posts from the Liner Notes blog.