Some of the greatest guitarists in rock and blues have been left handed. Jimi Hendrix, Paul McCartney and Nirvana’s Kurt Cobain are just a few of the famous lefties in the rock pantheon.

One disadvantge of the upside-down eGBDAE tuning is that most of the tabs and chord diagrams you'll find are backwards. So lefties must learn to flip chord diagrams over in their heads. 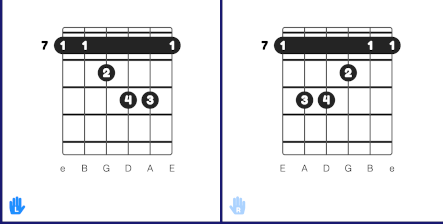 Even with left-handed guitar (or a re-strung right-handed guitar) lefties need to do mental gymnastics to read things like fretboard charts since the neck of their guitar reads right-to-left rather than left-to-right.

Well lefty fam, we've got you. FATpick includes a “lefty mode” that you can use to flip things around to the way they should be in your world. Throughout the app you'll find a small left-hand/right-hand icon in the corner. Just tap this icon to switch to the left-handed view of the world. Tap it again to switch back to righty-mode.

FATpick is the tab player that listens.

Import any Guitar Pro file into an interactive, auto-scrolling tab viewer sync'd with backing audio. FATpick listens to your performance, providing real-time feedback on your timing and accuracy, as you play along with any guitar.

You can download FATpick for free right now and be playing songs in just two minutes.

Also see more posts by Courtney or tagged Features, or Tools.
Or, go to the latest posts from the Liner Notes blog.