Several of FATpick’s best features have been inspired by user requests. And we’re delighted to announce that this latest release addresses yet another popular request.

Recently some of you have been looking for a way to get a better sense of the tabs before jumping into a new song — some kind of overview that could let you know what to expect and help you get oriented even before the first play.

To solve this problem we've added what we're calling a “heatmap” view of the score. This heatmap shows the location at which each note of the current track is played on the guitar fretboard. The notes that are played most often are marked with large, red circles. Smaller, bluer circles indicate spots on the fretboard that used less often in this track. 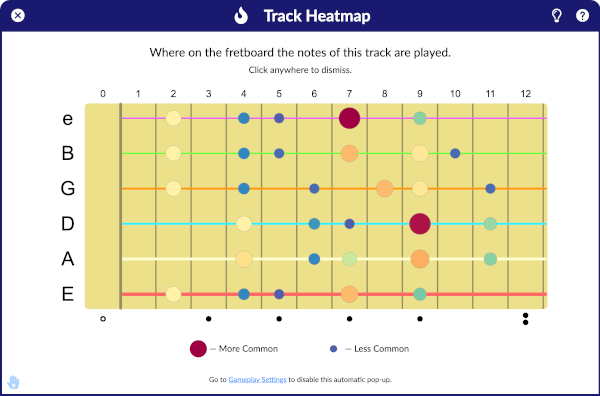 The heat map provides a useful visual summary of where you'll be playing as you perform the tab.

It appears automatically whenever a new song is opened in the FATpick player, and can be opened on-demand from the tools menu or from the quick links found in the song details panel on the tab player.

FATpick is a guitar tablature viewer that listens as you play along with any guitar, giving instant feedback on the accuracy and timing of your performance. Choose from hundreds of songs already shared by the FATpick guitar community or play custom songs my importing any Guitar Pro tab.

Visit the downloads page to get the latest version of FATpick for Windows, MacOS or Linux for free right now.

Also see more posts in Release Notes.
Or, go to the latest posts from the Liner Notes blog.