posted on Friday 19 February 2021 in Release Notes, Ver2 and Screenshots

FATpick v2.1.1 was released Friday, 19 February 2021. You can download FATpick here or by visiting fatpick.com.

This release includes a couple of notable new features. The first provides a frequently-requested capability: the ability to edit song data directly within the app. The second is a fairly sophisticated mechanism to automatically scale non-critical or cosmetic features to maintain a consistent game-play experience even when your computer starts to get overloaded.

You can now directly edit the title, artist name and other meta-data about the custom songs you import into FATpick.

To edit a song, first use the in-app search to find it.

You will find an edit button in the lower-left corner of the song "card" for each song in your personal library. Click this button to open the edit form. 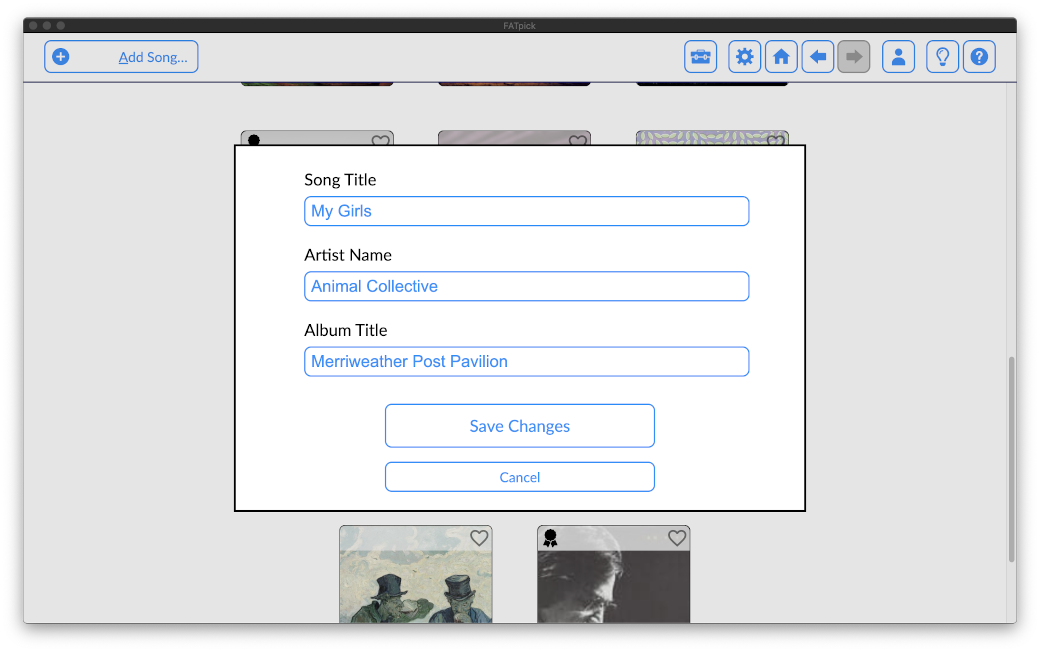 From this form you can modify details about the song including artist name, song title and album title.

The revised information will immediately be visible in the search results, tab player and throughout the app.

FATpick can now monitor FPS and other performance cues during game play to identify when the system is struggling to keep up, and automatically make subtle adjustments to graphics quality and other cosmetic features in order to reduce the load on the system and protect core gameplay features like the video frame-rate and audio quality.

These changes are temporary, reverting back to your original settings as your system's performance improves. Specifically, when auto-throttling is enabled FATpick will incrementally scale the quality down or up in an attempt to find the highest quality settings at which your system can maintain consistently high performance.

This feature is particularly helpful when you encounter occasional spikes in the demand for your system's hardware - such as when another application or a system scan becomes active in the background or an especially complex action is taken within the application itself. When auto-throttling is enabled FATpick can quickly detect and react to the strain being put on the system and avoid the distracting audio distortion or jerky animation that may otherwise occur.

Whenever the auto-throttling is activated a small notification icon appears in the lower-left corner of the tab player. This icon automatically disappears when the system reverts to your original settings.

Note that many of the parameters used for auto-throttling can also be manually configured via the Gameplay Settings and other menus. The auto-throttling logic always treats the manual configuration as the "target" values. It will scale-down from those targets as needed but will never increase these parameters beyond your manually configured values.

The auto-throttling logic can be disabled (and later re-enabled) via a toggle switch found on the Gameplay Settings menu.

🐞 Bug Fixes and Other Minor Enhancements

FATpick is an interactive music app that listens as you play along with any guitar, giving real-time feedback on your accuracy and timing. Play custom songs from any Guitar Pro file. Independently control the synchronized backing tracks with voice, volume and tempo settings. Plus a flexible metronome, chord dictionary, fretboard trainer and more tools for guitarists, right in the app. And that barely scratches the surface. FATpick can do a whole lot more.

Also see more posts in Release Notes, in Ver2 or in Screenshots.
Or, go to the latest posts from the Liner Notes blog.