posted by Courtney on Friday 5 February 2021 in Features, Ver2 and Screenshots

The song track controls or "mixer panel" is new and improved for FATpick 2.0.

The rest of this post describes in the different parts of the mixer pane in more detail.

Here is an annotated screenshot of the mix panel for your reference. 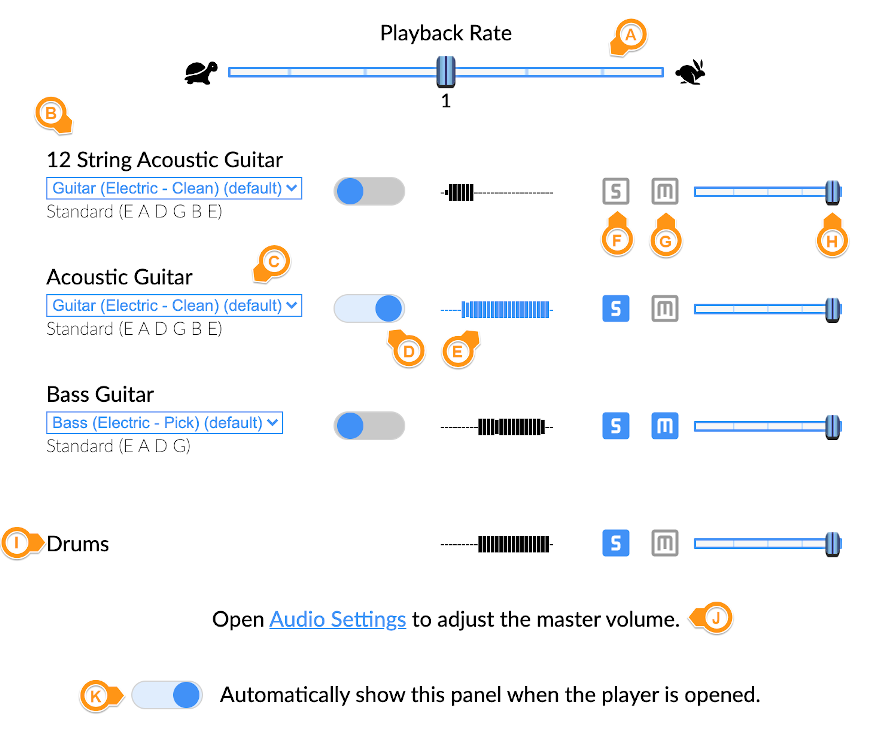 The playback rate slider controls the song tempo. Use it to play the song faster or slower than normal.

Move the slider by dragging the "thumb", clicking on the "track", using the left or right arrow keys on your keyboard when the slider has focus, or by clicking on the tortoise and hare buttons. The normal tempo — the BPM specified in the imported song file — is at the center of the slider. Points to the right of center are faster than normal, points to the left are slower.

Note that the playback rate slider uses a sort of "fish-eye" scale. For example the ticks to the right of center represent 1.5x, 2x and 3x speed, respectively, so the 1x to 2x range is given twice as much space as the 2x to 3x range. This helps you make very fine-grained adjustments for tempos slightly slower or slightly faster than normal while still allowing extreme variations like 0.1x speed or 3x speed.

Click the "1" below the slider to revert back to the song's standard tempo.

Whenever a non-standard tempo is set the current playback rate is displayed as a "badge" on the track control menu button.

Most of the panel is dedicated to a track list that includes the name of the track, the tuning (when appropriate) and several controls that let you customize the audio and gameplay experience.

FATpick generates backing audio for each track in the song using a variety of sample-based and synthesized instruments. Use this drop-down menu to choose the instrument or voice used to generate the audio for the track.

There are more than a hundred voices to choose from, including dozens of realistic-sounding (sample-based) guitar, bass, string, wind and horn voices as well a robust collection of fully-synthesized voices like the ones created by analog synthesizers and other electronic instruments.

The default voice for each track — the one specified in the imported score file — is easy to find. It always appears as the first entry in the drop-down.

Use this toggle switch to select the track you see in the tab player — the one you want to play along with. In practice mode you can freely switch between tracks — without even stopping the playback — but changing tracks will restart the song from the top when you are in performance mode.

These small graphs provide a high-level overview of where and how the notes in each track appear in the song.

It's a sort of zoomed-out view of the entire song. Each bar represents a small chunk of time — the song starts on the left and ends on the right. The height of each bar indicates how active the track is in that period.

For example in the screenshot we can see that the first track — the one named "12 String Acoustic Guitar" — is only used at the beginning of the song, while the second track ("Acoustic Guitar") starts playing a little after the first and continues to be heard for the rest of the song.

These charts make it easier to understand how each track is used in the song. For example you can tell at a glance which tracks are primary "parts" or instruments in the song and which tracks are simply fills or effects that are only intermittently used.

Clicking on one of these charts is another way to toggle the track selector to choose which track you want to see in the player.

The right side of the track listing contains DAW-like volume controls for each track.

The volume slider (H) determines how loud the track's audio is played — assuming the track isn't silenced by the mute or solo controls.

The solo button (F) is sort of the opposite of mute. It will silence all the other tracks in the song.

You can activate solo mode for more than one track at a time, despite the name. This is slightly counter-intuitive but the behavior is similar to that used by many DAW systems: when any track is in solo mode you will only hear the tracks that are in solo mode.

For your convenience you can click this link to open the main Audio Settings menu, where you can do things like control the master volume for the entire FATpick application or select a different input or output device.

By default the mix panel opens automatically when you first open a song in the player. Toggle this switch to make it stop doing that. (You can still access the mix panel from the button in the main navigation header, of course.)

You can also control this option from the Gameplay Settings menu.

Also see more posts by Courtney, in Features, in Ver2, or in Screenshots.
Or, go to the latest posts from the Liner Notes blog.