When does FATpick expect a note to start?

posted on Friday 17 December 2021 in Support, Tabs, Player, and FAQ

FATpick renders any Guitar Pro tab - or hundreds of songs already shared by the FATpick community - in an animated, side-scrolling tablature viewer that's designed to be used with your guitar in hand, actively playing along with the tab. And as you play, FATpick listens to your performance, in real-time, to provide instant feedback on your accuracy and timing.

To make the most of this feedback it's helpful to understand exactly what and when FATpick is expecting you to play.

This post describes the various signals and cues that indicate precisely when to strike a note in order to achieve "perfect" timing.

Skip ahead to "When does FATpick want me to play each note?" if you're already comfortable with the basic game play.

FATpick's song viewer is based on conventional guitar tablature, so the format is familiar and the song-reading skills you develop are readily transferrable. But to take advantage of the animated and interactive format, FATpick extends the basic tab notation in some natural and intuitive ways.

The representation of tempo, duration and timing is a notable example. Conventional tab transcriptions often lack any indication of the timing or duration of notes; relying on your familiarity with the song to fill in the rhythm. Other transcriptions use a bastardized form of stave or drum notation to indicate timing, but these annotations - esoteric symbols placed near the notes on the tab - can be hard to scan and, when animated, prone to disorienting changes in the scroll rate since the width of each symbol is disconnected from the actual duration of the corresponding note. FATpick's tab player provides a more intuitive representation of song tempo and note durations: the width of each note-bubble directly reflects the duration of the corresponding note. The relative duration of each note is obvious: a quarter note is twice as wide as an eighth note. And there's no sudden acceleration just because we happen to hit a run of 16th notes; the notes scroll by at a uniform rate.

NOTE: A full description of the FATpick's tablature notation is beyond the scope of this post, but just as a quick orientation:

If you're not familiar with guitar tabs, see this guide to tablature notation.

With FATpick's extended tablature notation you can quickly see exactly where and when to play each note.

In case you haven't seen FATpick for yourself, a quick demonstration will probably clarify things. You can find a demonstration of the FATpick gameplay experience in the following video.

Another, older demo can be found here.

When does FATpick want me to play each note?

The thick, red, vertical line on the tab is called the playhead. It marks the "current" time in the song.

Notes are meant to be played precisely when the corresponding bubble hits the playhead, and continue to ring-out as long as the bubble is under the playhead.

This is the basic, fundamental and indelible indication of when each note is supposed to begin and end.

You can, however - and most users do - enable some additional visual cues for the target note timing via the "Pulse Notes" and "Bounce Notes" options under Gameplay Settings.

These options are fully independent. You can turn on one, or the other, or neither, or both. No matter how you have these options configured, the playhead indicator will still be visible.

The following screenshots illustrate the various note timing cues in a handful of situations.

Prior to Note Onset

If you think about it, the process of playing a note on a guitar starts slightly before the note is struck. First you must bend the string slightly with a pick or your finger, but the note doesn't really "sound" until the string is released.

While the animation exaggerates the timing and degree of displacement, this action is subtly reflected in both the bounce and pulse animations. In each case, the animation begins slightly before the target note start.

Before Note Onset: Preparing to play the first note bubble labeled "4" on the third string. Both the pulse and bounce animations have started to take effect.
(TOP: Playhead Only; MIDDLE: Pulse Notes; BOTTOM: Bounce Notes)

Here we see an example of the playhead-only, pulse and bounce note timing cues, slightly before the expected start of the first, eighth-note-length note to be played on the 4th fret of the 3rd string.

The note onset - the time at which the note starts to "play" - is expected the instant that note bubble connects with the playhead. 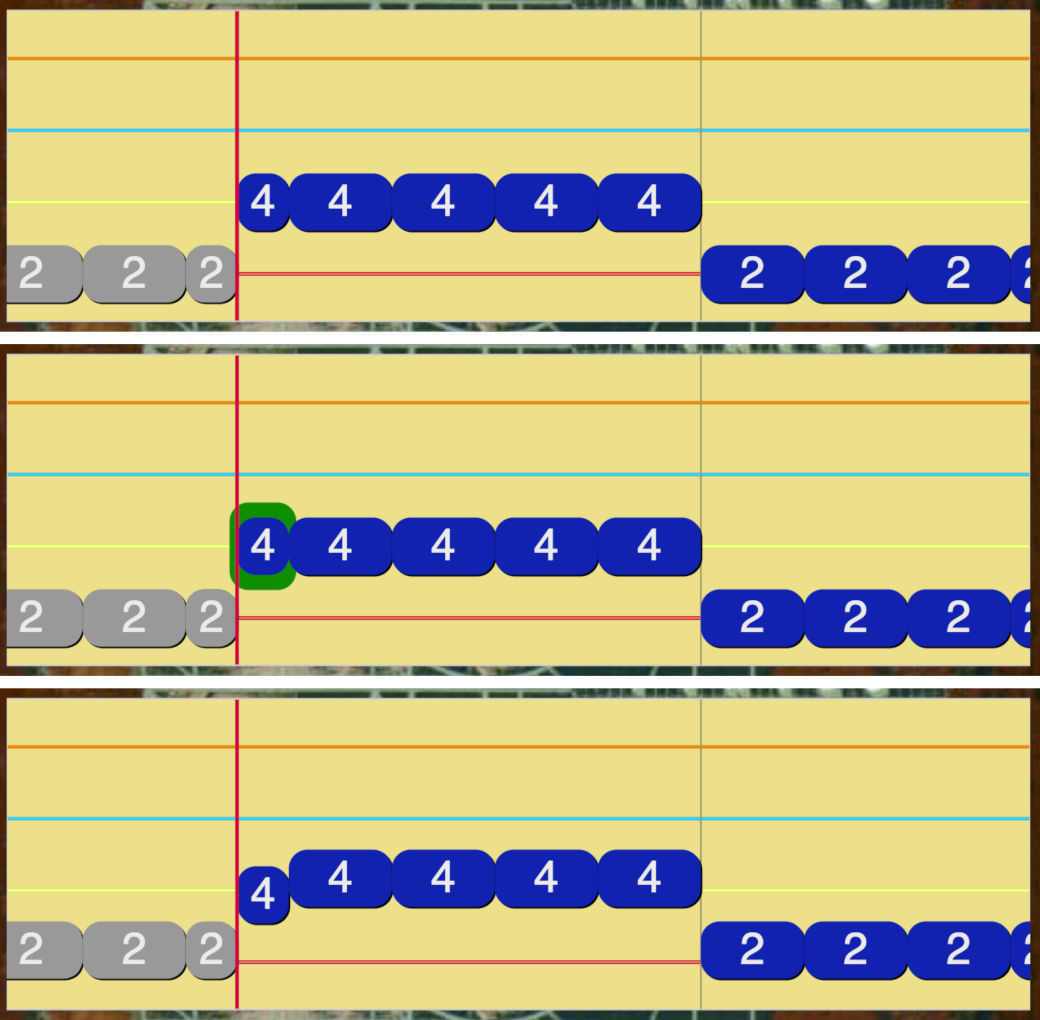 At Note Onset: Expected start of the note bubble labeled "4" on the third string. The note bubble has just barely made contact with the playhead. Both the pulse and bounce animations have reached their maximum extent (largest size and lowest vertical position, respectively).
(TOP: Playhead Only; MIDDLE: Pulse Notes; BOTTOM: Bounce Notes)

Here we see an example of the timing cues at the precise moment of the expected start of the first, eighth-note-length note to be played on the 4th fret of the 3rd string. To score "perfect" timing for this note your finger or pick should release the string at exactly this time.

A note is expected to be sustained - to ring out audibly - as long as the corresponding bubble is beneath the tab playhead line.

The bounce and pulse animations will "decay" over the duration of the active note. I.e., when pulse notes is active the halo will slowly shrink away, but won't fully disappear until the expected note offset (note end). When bounce notes is active the note will slowly revert to its original position slightly above the associated string-line on the tab. 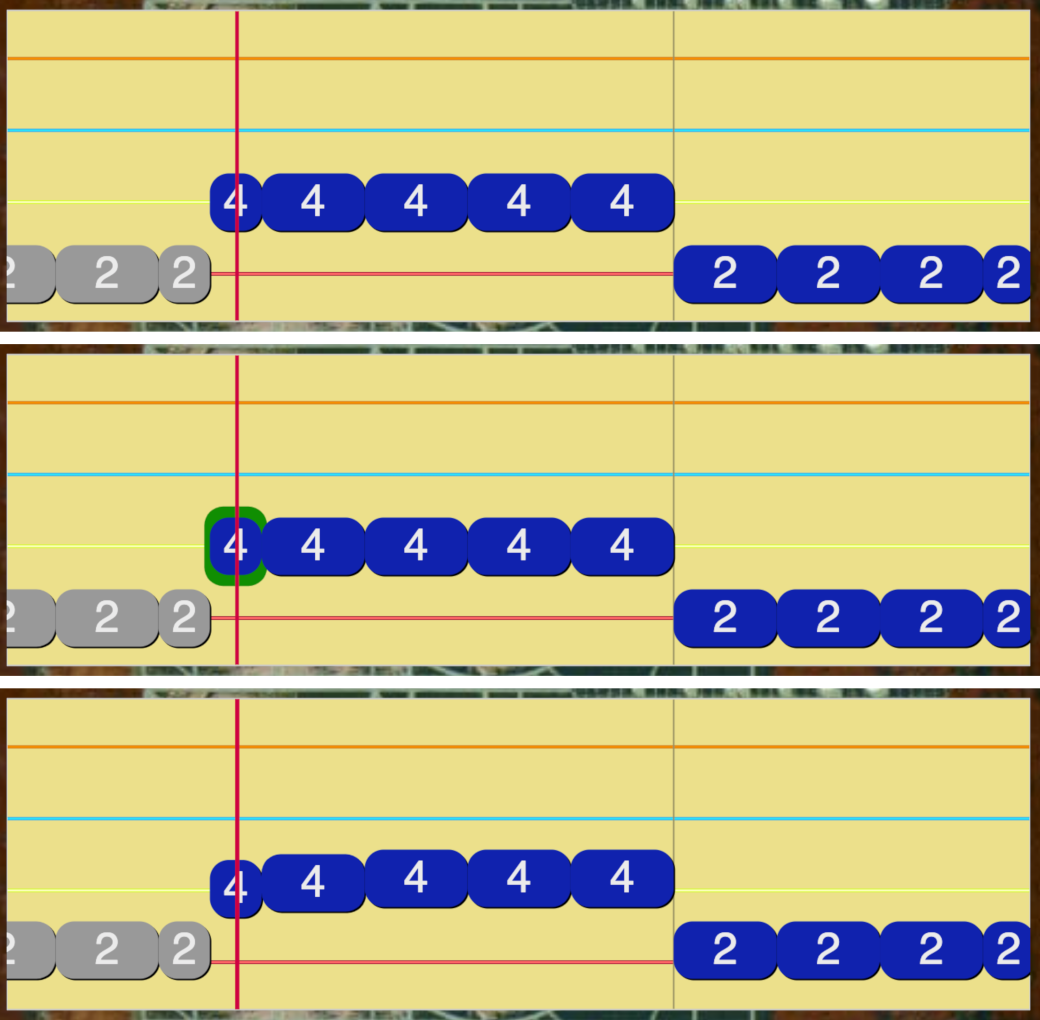 Active Note: The note corresponding to the bubble labeled "4" on the 3rd string is active. Both the pulse and bounce animations have begun to revert to their original size and position (respectively), but will not fully disappear until the expected note offset. The note is expected to continue to ring out (be audible) as long as the bubble remains under the playhead.
(TOP: Playhead Only; MIDDLE: Pulse Notes; BOTTOM: Bounce Notes)

Here are the playhead-only, pulse and bounce note timing cues a little more than half-way through the duration of the first note played on the 4th fret of the 3rd string. The note is expected to be sustained throughout this period.

The note offset - the time at which the note ceases to "play" - is expected the instant that note bubble moves out from under the playhead.

Note Offset: Expected finish for the note corresponding to the first bubble labeled "4" on the 3rd string. Note that this happens to be the expected onset time for the second such note on this string, but that's a coincidence.
(TOP: Playhead Only; MIDDLE: Pulse Notes; BOTTOM: Bounce Notes)

Now we've finally reached the expected note offset (note end) for the first, eighth-note-length note to be played on the 4th fret of the 3rd string. At this time the note should no longer be audible - if necessary the string should be muted to ensure that.

Why is note timing important?

But these dimensions are not fully independent: Even if a tone of the appropriate pitch is found, FATpick may tag a note as "missed" unless a note onset (note start) is detected in the appropriate time window.

For this reason, understanding the proper note start time to target is important to both the rhythm/timing and pitch/accuracy components of FATpick's note detection.