posted on Tuesday 11 May 2021 in Features and Support

The Gameplay Settings Menu includes a large number of configuration options you can use to modify the appearance and behavior of the FATpick tab player.

A screenshot of the menu is provided below. The following sections describe each option in detail. 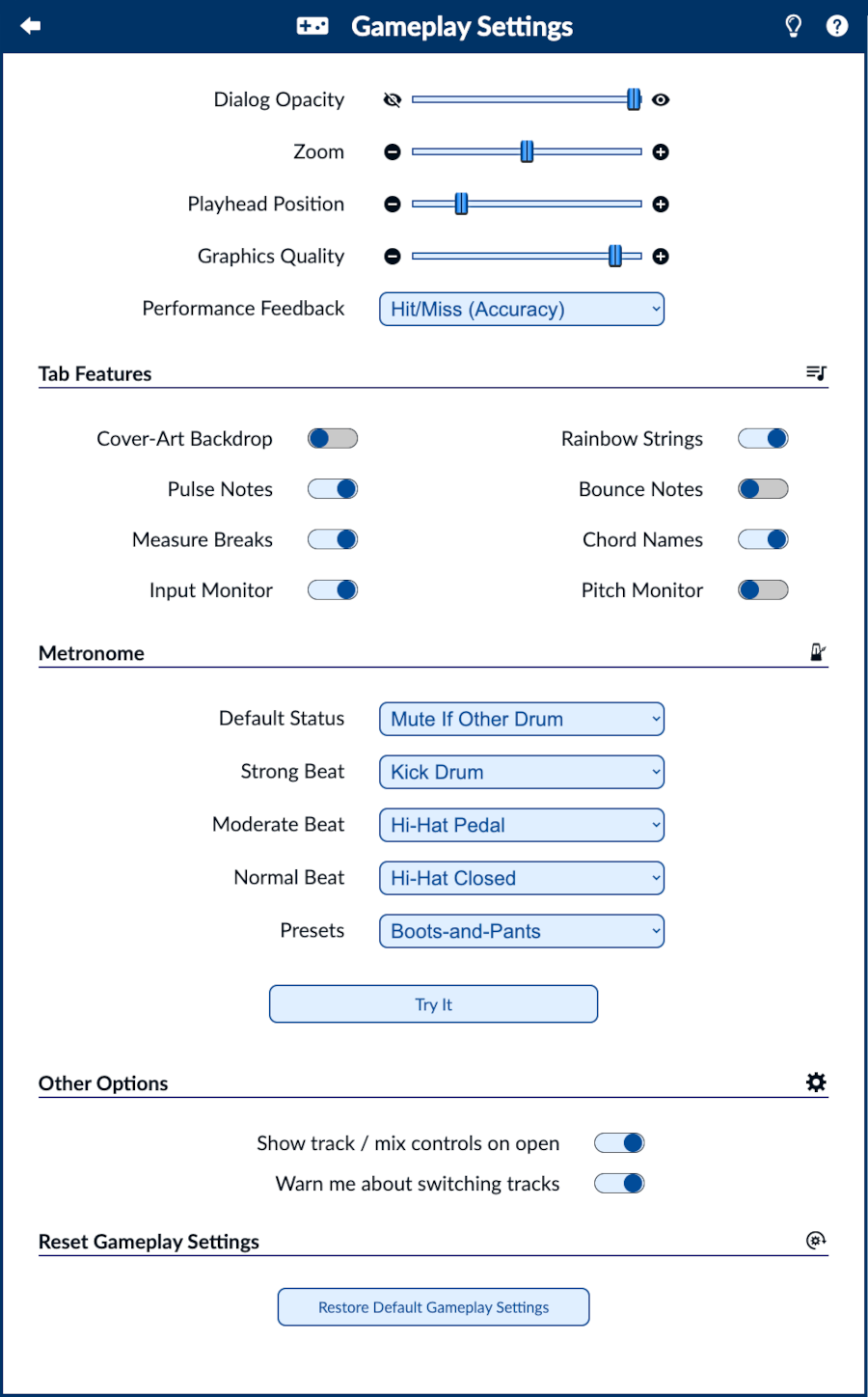 You can find Gameplay Settings under the Main Settings Menu. To open it:

To return to the main settings menu, click the back (left arrow) button in the dialog header or hit ESC (or B) on your keyboard to invoke the keyboard navigation shortcut.

This dialog opacity slider only appears when the Gameplay Settings menu is opened from the tab-player / game-play screen itself. It can be used to temporarily change the transparency (opacity) of the modal dialog window itself.

Moving the slider to the left will decrease the opacity (increase the transparency) of the settings dialog, allowing you to "see through" the dialog window, exposing the tab player view underneath.

You may want to use this option to get a clearer "preview" of the impact of your gameplay setting customizations on the tab player itself.

Move the slider all the way to the right again to restore full opacity to the settings dialog.

While the dialog controls should still be partially visible even when the slider is turned all the way down, if you find the controls too dim use, don't panic. This setting is temporary. It reverts to the original position (full opacity) whenever the gameplay settings menu is re-opened. Simply hit ESC or B on your keyboard - or click on the main FATpick application window outside of the dialog frame - to dismiss the Gameplay Settings Menu. The dialog will be back to normal the next time you open it.

The tablature zoom slider will zoom in or out on the notes on the tab - increasing or decreasing how much of the song appears on screen.

Move the slider to the left to zoom out - shrinking the size of each note to show more of the song on-screen at one time.

Move the slider to the right to zoom in - increasing the size of each note but showing less of the song on-screen at one time.

The zoom level can also be controlled on tab-player screen directly, using the conventional means (the same controls you're probably familiar with from other applications):

The playhead - the thick, red vertical line in the default theme - marks the "current" time in the song. Notes are meant to be played the moment they hit the playhead (and held for as long as they are under the playhead).

The subtle details added at the higher quality levels look great - and may improve legibility - but this elegance has a cost. Complex image rendering requires more processing power. At the extreme end of the spectrum, the application - and your hardware - may have trouble keeping up.

If you run into performance issues - or simply prefer a less "fussy", minimalistic style for the notes on the tab - you can use the graphics quality slider to fine-tune the rendering complexity.

Incidentally, you can find other performance tips in blog posts filed under troubleshooting.

When you play along with a song in the tab player, FATpick listens to your guitar, scoring your performance based on note accuracy and timing. Each note is marked as hit or missed, and the timing of each note that is hit is graded on a scale from "very early" to "very late". This evaluation is reflected in the score you earn in the play-thru and in the performance summary breakdown that appears at the end of the song.

The performance feedback drop-down specifies whether or how this information is indicated in "real-time", as you play the song: 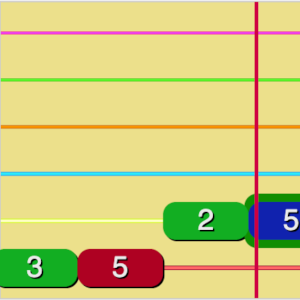 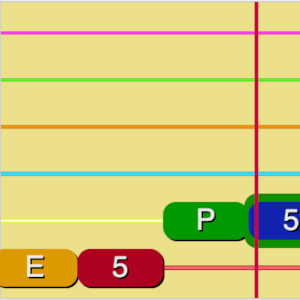 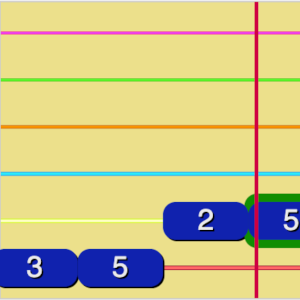 Note that FATpick always measures both accuracy and timing, no which feedback mode is selected. This option determines how the performance evaluation appears or is reported as you play the song, but internally FATpick is tracking the same information in all cases. This keeps the performance score consistent, supports the detailed accuracy and timing break-down that appears in the end-of-song performance summary, and lets you seamless switch between feedback modes within a single playthrough.

When cover-art backdrop is enabled, the cover art associated with the current song (if any) will appear in the background of the tab-player, behind the tablature itself.

When there is no cover art to display, or this option is disabled, the background reverts to the default associated with the currently active theme.

When rainbow strings is enabled, the horizontal lines on the tab that represent the strings of your guitar are each rendered with a different color to aid in their identification.

You can even get actual strings with matching colors to string your guitar with.

When this toggle is in the off position, the string-lines on the tablature are rendered with the same, theme-dependent color.

As mentioned above, the playhead indicates our current position in the song. The notes that are in contact with the playhead are "active" and audible.

The pulse notes option adds another visual cue that indicate which notes are active. When this option is enabled, a small "halo" will appear around each note when it is mean to be played.

The size of the halo reflects the dynamics of the plucked (or picked) string. The highlight reaches its peak extent at the expected note onset - the exact moment you want to "pluck" the string - and gradually fades to reflect the attenuation ringing note.

The bounce notes option is yet another visual cue that you can enable to indicate the active notes.

When this toggle is active, note bubbles will float slightly above the tab lines when "at rest", dropping down - like the hammer in a piano - to strike the line precisely at time of the expected note onset and lifting off again at the end of the note.

Note that you can enable either, both, or neither of the pulse and bounce indicators. When neither pulsing or bouncing is active, contact with the playhead can be used to identify the timing of the active notes.

When active, measure breaks in the musical score will be indicated on the tab player by thin vertical lines.

If the selected track includes explicit chord or strumming-pattern information and the chord names toggle is enabled, chord and strum-pattern annotations will be shown on the tab-player, just above the primary tablature grid.

Note that not every track - not even every rhythm guitar track - includes this information. Some tracks list the individual notes on the tablature without an explicit chord notation. It depends on the information available in the imported score file.

When the input monitor is active, a volume meter will be visible on the tab player, indicating the volume or "level" of the input signal in real-time.

Among other uses, this meter is a quick way to verify that FATpick is hearing your guitar properly.

When the pitch monitor is active, the note (pitch class) and octave of the most recently detected pitch will be displayed at the top of the tab viewer, with a flashing "bulb" that to indicate note onset and offset.

This information will fade in and out to reflect the strength and age of the detected pitch.

Note that the pitch and onset/offset detection algorithm evaluates the audio signal much more frequently than we could display this information - hundreds of times each second - so the pitch monitor is only a coarse-grained approximation of the actual pitch and onset evaluation.

The settings found under the metronome heading control the sound and behavior of the generated metronome track, as described in another post.

When this toggle is enabled, the track mix control panel will be displayed automatically whenever a song is opened in the tab player. This panel lets you select the specific track you want to view (and play) in the tab player, set the playback rate (custom tempo) for the song, and configure the voice and volume for each track independently.

Note that the track mixer can be opened at any time by clicking on the button with the "three horizontal sliders" icon found in the upper-left corner on the tab player screen.

Warn Me About Switching Tracks

When the tab player is in practice mode you are free to change the "selected track" - the specific track for which tablature is visible and that you are expected to play - at any time. Selecting a different track is allowed, even when the tab player is running. The notes in the new track up to the current point in time may be marked as "skipped", but you will not lose your place in the song.

When the player is in performance mode the rules are a little different. A performance is meant to be a continuous playthrough. You can pause the performance (and later restart for the same point) but you can't jump around. You can still change the selected track, but doing so will reset your progress in this play-thru. You must play the new track from the beginning of the song.

When this option is enabled, a small warning is displayed whenever progress would be lost by switching to a different track while in performance mode, asking you to confirm that you really mean to switch tracks and start over from the beginning.

Clicking the restore default gameplay settings button will revert all of the configuration options in this menu back to their original values, restoring the default FATpick gameplay experience.

You're free, of course, to re-apply some or all of your customizations after restoring the default settings.

Also see more posts tagged Features or Support.
Or, visit the tag index or view the latest posts from the Liner Notes blog.