FATpick v2.4.5 was released on the 15th of July, 2021 and is available for immediate download.

This release introduces the latest member of FATpick's growing stable of interactive tools for guitarists: The Scale Explorer provides interactive note charts for more than 500 scales for guitar, bass, ukulele and more. Several of the existing fretboard-based tools have also been enhanced with new capabilities related to those developed for the scale explorer.

See below for more detail about the changes in this release, or download the latest version of FATpick right now - for free - and see it for yourself.

The Musical Scale Explorer represents a major upgrade to the functionality of the already-popular interactive fretboard reference tool. 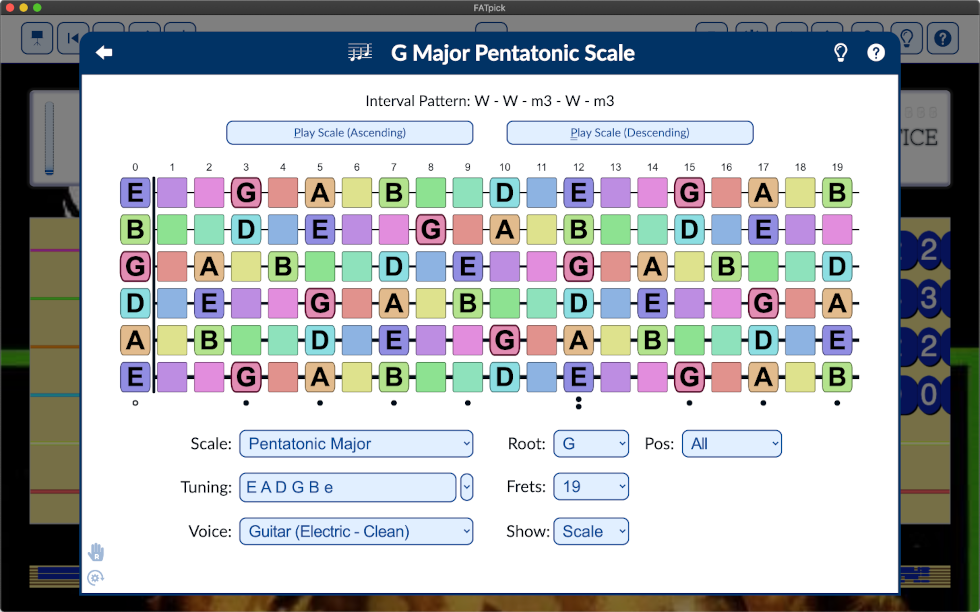 But it's more than a quick and convenient reference. The tool is packed with subtle auditory and visual cues - and interactive features - that help you wrap your head around the structure of the scale, and provide practical information you can use to apply that knowledge to improve your playing.

(The scale explorer is described in more detail in a later post.)

Many of the features and functionality developed in support of the scale explorer have also been used to improve existing fretboard-related tools like the the tuning (fretboard) reference charts and track heatmap.

The following changes have been applied to all applications of the fretboard toolset:

FATpick is the tab player that listens. Use any guitar. Play any song.

Open any GuitarPro file - or hundreds of songs already shared by others - in an animated tab viewer - automatically synchronized with backing audio tracks - that indicates exactly when and where to play each note.

FATpick listens as you play along with any guitar to provide instant feedback on your pitch and timing accuracy.

Currently FREE for Windows, MacOS and Linux. Get it here.