posted on Friday 28 May 2021 in Features and Tools

FATpick's in-app tuner detects and displays the pitch of notes played on your guitar, bass or other instrument. Use it to re-tune your instrument to an alternative tuning or to check your tuning with the same pitch detection algorithm used by the in-game tab player. 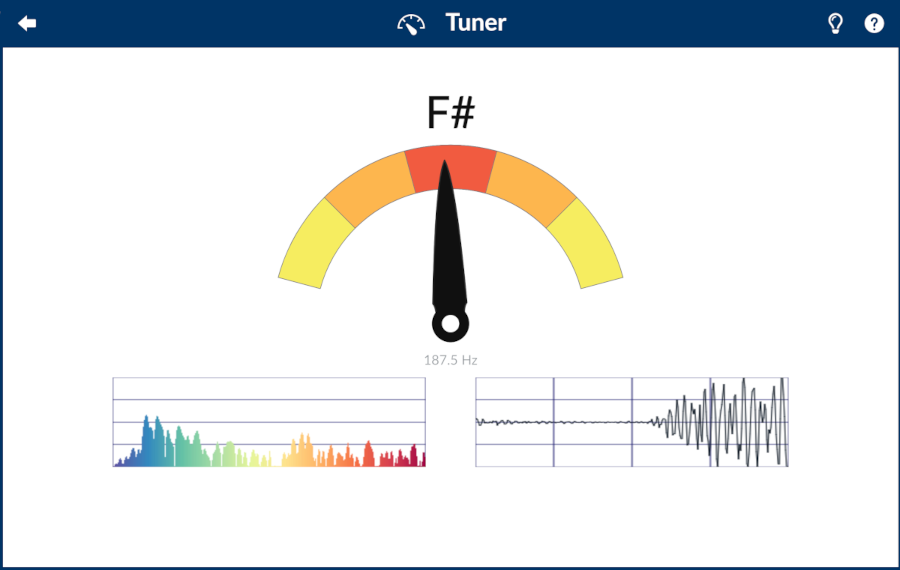 The tuner provides a graphical representation of the detected pitch and related information about the audio signal picked up by the microphone (or other input device).

The primary component of the interface is a gauge similar to what you might find on a tuner guitar pedal or other electronic tuner. It has three parts:

Below the primary tuner gauge you will find a couple of other visualizations of the audio signal. These add a bit of flair, but they aren't just eye-candy. They can be used to get a better sense of how FATpick is hearing the sound of your instrument.

The spectrogram is indicates the intensity of individual frequencies in the input signal.

As you know, your guitar generates sound from the vibrations of the strings. The vibrating strings create (acoustically or electronically) variations in air pressure - sound waves - that our ears interpret as sound.

But pure tones are rare in practice. Most of the sounds we hear aren't simple, uniform waves. In the real world sound waves are irregular and noisy. They have chaotic fluctuations from the pure form, and often overlap with other simultaneous sounds.

Because of this, in the science of digital signal processing (DSP) we think of the pitch of a given audio sample not as a wave of a single frequency by at the combination of many individual waves with different frequencies at various levels of intensity.

The spectrogram is a visual representation of this analysis. For a given frequency it indicates the strength of that component frequency in the composite sound wave found in the audio sample.

Incidentally, one interesting thing you can see with the spectrogram is the appearance of resonant frequencies or harmonics. When you play a given note on your guitar you'll typically see not just one several spikes on the spectrogram. This pattern reflects the resonant frequencies generated by your guitar: a large peak at frequency of primary pitch echoed by smaller peaks at octaves above and below the fundamental note. E.g., when you play the note E3 you'll see a large spike at 220 Hz and smaller spikes for the E note at different octaves like E2 at 110 Hz, E4 at 440 Hz, and so on.

The oscilloscope is a "picture" of the sound wave found in input signal.

A digital microphone measures the level (volume) of the input audio tens of thousands of times per second - typically collecting 48000 or 44100 samples per second - to capture the "shape" of the sound wave.

The oscilloscope is simply a running plot or graph of samples. Each point indicates amplitude of the audio signal at a given instant in time.

On the oscilloscope you can see the "spike" in signal created by a percussive sound like plucking a guitar string, or the standing wave created by letting a string "ring".

Opening and Closing the Tuner

The electronic tuner tool is found in FATpick's Tools Menu, and is rarely more than two clicks away from any screen in the app.

The tuner will be active as soon as the dialog is opened, showing the pitch picked up from your live mic as long as the tuner is open.

To close the tuner, you can do any of the following:

Also see more posts tagged Features or Tools.
Or, visit the tag index or view the latest posts from the Liner Notes blog.