posted by Rod on Tuesday 2 June 2020 in Features

If you go looking for advice on how best to learn to play a new song on the guitar, one tip you'll hear over and over again is to start slow.

Play the song - or just a small part - as slow as you need to in order to hit the notes. Keep practicing at that tempo until you're comfortable, and gradually increase the speed until you can play the song at full tempo. Or, if you really want to burn-in the muscle memory, keep increasing the speed until the normal pace feels like slow motion.

This doesn't work the other way around. You can't start fast but sloppy and get more accurate over time. You need to play a song right - at whatever pace is needed - and the speed will come with practice.

FATpick has several features designed to help with this process — notably using a repeat loop to play the same part of the song over and over again — but our topic here is the playback rate control.

Using the playback rate control you can choose to play a song slower - or faster - than normal. Both the rate at which the notes scroll by and the synchronized audio track will be slowed down or sped up accordingly.

The playback rate control can be accessed by clicking on "track configuration" button. On the upper-left of the tab viewer you'll find a set of media controls that look something like this:

Clicking on the "track settings" button - the one with the "three horizontal sliders" icon - will open a panel similar to the following. 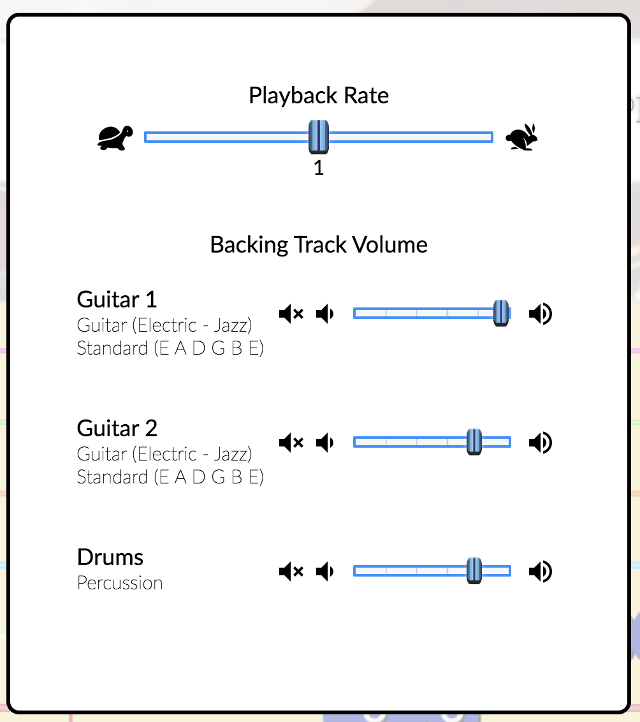 At the top you'll find the playback rate slider, which works like this:

(The bottom half of the panel has controls that set the volume of each individual backing track, as described elsewhere.)

There are some helpful details about this feature that may not be obvious:

Click the track settings button again - or anywhere outside the panel - to return to the tablature.

FATpick is the tab player that listens.

Import any Guitar Pro file into an interactive, auto-scrolling tab viewer sync'd with backing audio. FATpick listens to your performance, providing real-time feedback on your timing and accuracy, as you play along with any guitar.

You can download FATpick for free right now and be playing songs in just two minutes.

Also see more posts by Rod or in Features.
Or, go to the latest posts from the Liner Notes blog.