posted on Sunday 10 April 2022 in Settings, Features and Player
This feature - like many of FATpick's most interesting features - was inspired by a request from one of our users.
Thank you to Matt C. for the suggestion!

If you'd like to request a feature of your own you can contact us via the web here or use the in-app feedback form by clicking on the lightbulb icon in the upper-right corner of every screen in the FATpick desktop app. You can find other examples of feedback shared by FATpick users at FATpick.com.

Because the strings on the tab are listed in the opposite order that they appear when you are looking head-on at a guitar, it might seem like guitar tabs are "upside down" . The string at the bottom of the guitar - the thin high e string in standard tuning - is found at the top of the tab. The string at the top of the guitar - the fat low E string - is found at the bottom of the tab. This may feel a little counter-intuitive, but it is a convention that is widely followed. It's upside down when you are looking at a guitar in profile, but it feels more natural when you're actually holding your guitar. Reading from bottom to top, the strings on the tab appear in order from lowest (thickest) to highest (thinnest), reflecting the guitarist's perspective when looking down at the strings.

Guitar Orientation v. Tab: The conventional tablature notation lists the strings of a guitar from high to low. I.e., in the EADGBe tuning, the strings appear in the order e, B, G, D, A, E (reading from top to bottom). This order is upside-down compared to what you see when facing the guitar (from the "audience" perspective), but makes more sense from the perspective of the person actually playing the guitar (when you are looking down at the strings).
Also see How to Read Guitar Tabs for more information about tablature notation.

However, there are some cases in which you might want to flip that standard string order. 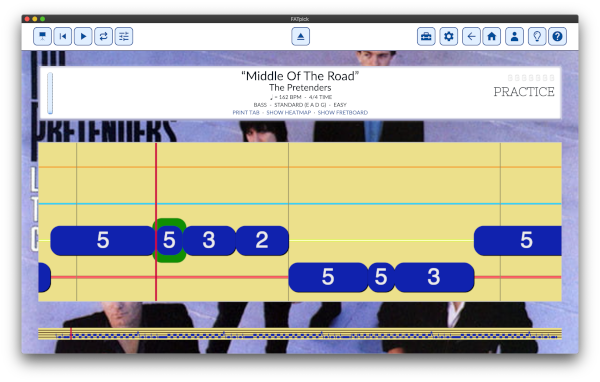 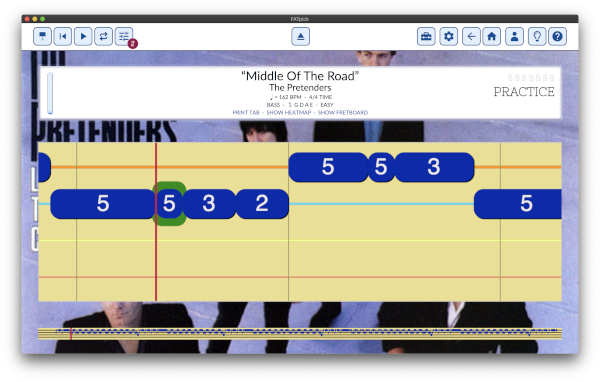 Flip Strings on Tab: The same bass score as seen in FATpick's tab player, in normal mode (first) and with strings flipped (second).

FATpick now offers that option. Enabling "flip strings" will reverse the order in which strings appear on the tablature, such that the typical EADGBe guitar tuning will be listed as eBGDAE (reading from bottom to top on the tab).

But why would you want to do this? One obvious example is well known to left-handed guitarists:

NOTE: To be more specific, the standard mandolin tuning is GGDDAAEE. A mandolin typically has 8 strings, but organized into identical pairs. Like a 12-string guitar, while there are technically 8 (or 12) strings, there are effectively only 4 (or 6) distinct strings as played, since the strings are almost always played in pairs.

The "Flip Strings" feature provides exactly that capability. It gives FATpick users the ability to reverse the order in which strings appear on the tab.

Since this use case is a little bit obscure, the Flip Strings option is hidden by default. To reveal it, you must first enable "Show Flip Strings" from FATpick's Gameplay Settings menu. 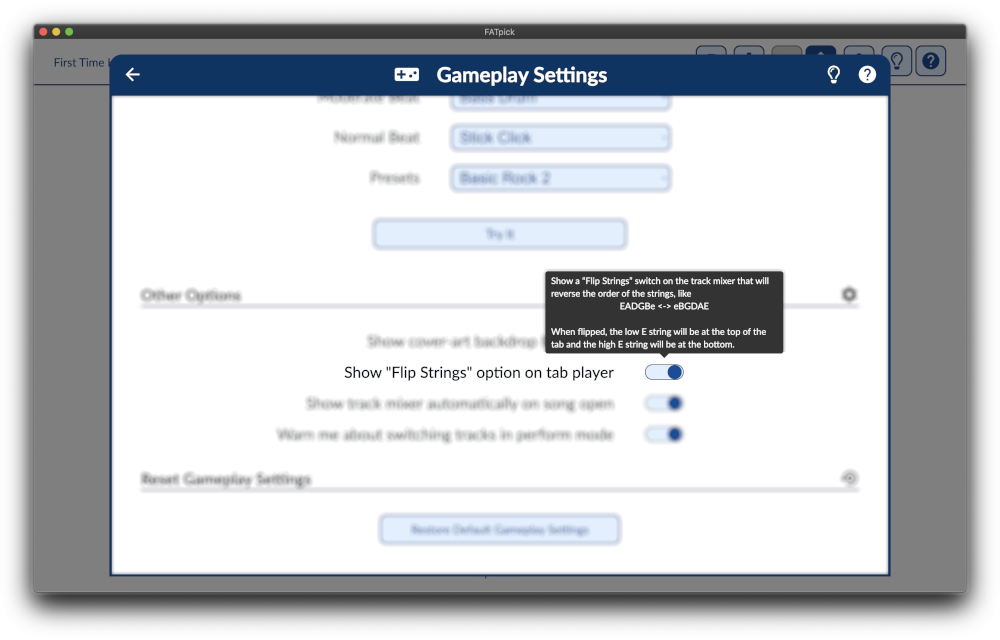 To enable the flip strings option for all tabs and songs:

Note that this won't actively flip the string order on any of the tabs yet. Enabling this setting just exposes the control that you can use to flip the strings on a song-by-song basis. (See below.)

Flipping the order of strings on the tab

Once "Show Flip Strings" is enabled, a new toggle switch will be visible on the track-mixer / song-settings control panel available on the main tab viewer or gameplay screen.

This new option - labelled "Flip Strings" - will reverse the order in which the strings appear on the tab when enabled. Simple switch the toggle button to the on position to flip the order of the strings - effectively mirroring the tab vertically - and switch it back to the off position to return to the original (default) orientation.

Flip Strings: Once "Show Flip Strings option on tab player" is enabled you will find a "Flip Strings" toggle button in the track-mixer panel for each song.
Like the playback rate and other settings, this option is set on per-song basis and is sticky across both song-play and application sessions.

For example, for a song transcribed into tablature for a guitar in the standard EADGBe tuning, reading from top to bottom the strings on the tab will be listed from high to low pitch. The thinnest-gauge, "high e" string (E4) will be first, followed by B3 (usually a similar gauge), then G3, etc., until we reach the thickest-gauge "low E" (E2) string at the bottom. Enabling "Flip Strings" will reverse this order such that the E2 string is at the top of the tab and the E4 string is at the bottom. It's as if the guitar was tuned to eBGDAE rather than EADGBe, however the individual notes of the song will move with the string. (See the example above for a visualization.)