posted by Rod on Sunday 17 October 2021 in Features, Tools and Fretboard

Notes on the syntax used to specify custom instrument tunings to the fretboard-related reference tools.

The fretboard chart, scale explorer and some other tools in FATpick provide an interactive reference chart that helps you to visualize the notes on the fretboard.

Note charts for the familiar EADGBe guitar or EADG bass tuning are pretty common, but these tools are more flexible than most. Not limited to the standard tuning or even specific instruments, these tools can render the notes on the neck of virtually any fretted string instrument: any tuning, any number of strings, any number of frets. (Why just "virtually", then? See this tangential note.)

For your convenience, a menu of tuning "presets" is provided. This is a list of common (and many uncommon) tunings for a variety of instruments. The list is evolving - there are small changes or additions from release to release - but it currently includes more than 90 different tunings not just for guitar and bass, but for ukulele, pedal steel and mandolin, and across obscure variations like 5-string and 6-string bass, 6-string uke, and tunings for guitars spanning 6, 7, 8, 9, 10 and 12 strings. Simply select an item from the list to instantly switch to a fretboard diagram for the selected instrument and tuning.

But it's virtually impossible to provide an exhaustive list. The list is finite, surely, but impractically large even for a single instrument like a typical 6 string guitar, let alone for the set of all possible tunings an arbitrary number of strings. Besides, it's fun to experiment: maybe you want to explore weird or experimental tunings of your own invention; maybe you want to explore tunings for more exotic instruments like lute or sitar, or obscure historical instruments.

No worries. We've got you covered. In addition to the pre-defined list, you can use a text field to enter a custom tuning to view the notes on an arbitrary fretboard.

This post describes the format used to specify those custom tunings.

The text-input field labelled "Tuning" is used to specify a custom tuning as a plain-text string. By default - and as seen in the screenshot below - this field contains the tuning specification E A D G B e - the standard tuning for a 6-string guitar.

More generally, whenever a preset tuning is selected from the drop-down list this field will be updated to display the corresponding tuning descriptor. And vice versa: when you enter a "custom" tuning that matches one of the pre-defined values found in the menu, the corresponding menu item will be automatically selected as well. 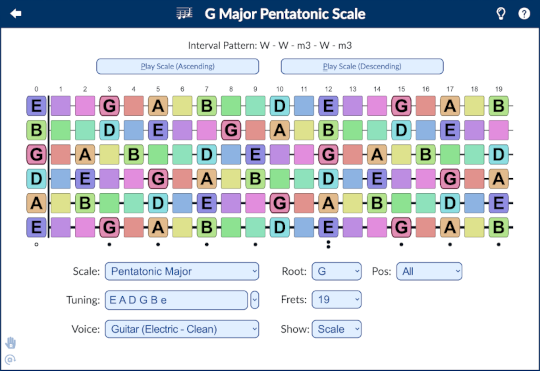 Screenshot of the fretboard control form as it appeared in the scale explorer as of FATpick v2.4.5.
Note the "Tuning" field found in the second row of controls (and the tuning-preset drop-down menu, which is triggered by the small (V) button to the right of the text input field).
(Click the image to open full-size view in a new window.)

To enter a custom tuning, click on the text field and type your tuning descriptor. Hit ENTER - or navigate away from the field - to "submit" your changes and trigger a refresh of the fretboard diagram.

The tuning parser is flexible - and pretty forgiving - so there are a number of more-or-less equivalent ways to express a given tuning descriptor. And the parser employs additional heuristics to detect various "special cases" - sometimes based on fairly subtle cues - and provide more intelligent or intuitive handling. Many of these nuances are discussed in more detail below. It seems as if some general guidelines may be a better place to start, however. While the parser is considerably less rigid than implied here, let's first lay out the general structure of the tuning descriptor.

Some basic examples of the custom tuning descriptor include:

The general guidelines at play are as follows:

1. One note per string, separated by spaces.

To specify a custom tuning, simply enter a list of notes indicating the open-string tuning of each string, ordered from low to high.

Add # or b to a note name to indicate sharp or flat notes. For example the "Drop B" tuning B F# B E G# C# has three sharp notes and the "Drop F" tuning F C F Bb D G has one flat note.

The tool is pretty good at inferring the octave of each note based on context cues but you may append an octave number to the name of the note to indicate the octave (in "scientific pitch notation") if the tool doesn't guess the right octave automatically.

This is especially useful when specifying "reentrant" tunings that aren't in strictly increasing order, as are frequently used in ukulele tunings. For example the concert ukulele tuning (gCEA) is G4 C4 E4 A4 in scientific pitch notation.

4. Spacing and capitalization is recommend but not required.

It's not strictly necessary to include a space (or other delimiter) between the individual notes in the tuning descriptor. For example the standard guitar tuning may be specify as simply EADGBE or (with octave numbers) E2A2D3G3B3E4.

The parser is case-aware but not strictly case-sensitive. The tuning specification eadgbe is equivalent to EADGBE (or EADGBe, for that matter).

But the use of capitalization and delimiters can help the parser to distinguish between ambiguous tuning descriptions. For example, it's not entirely clear how best to interpret a string like abcde. Is that 5 notes (A B C D E) or 4 (Ab C D E)? Including capitalization (AbCDE) or spaces (ab c d e) or both (Ab C D E) can help the parser figure out which tuning you intend.

For a more nuanced discussion of these features see the following sections.

In this section we provide a more thorough description of the parser syntax and related topics.

The tuning specification is a list of notes indicating the "open string" tuning of each string on the instrument, ordered low to high (bottom-to-top on the fretboard diagram). A space or comma may be used to separate the tuning for each individual string.

Notes may be described in any of the following ways:

Note that the octave number may be any integer value, including zero (E0) and negative numbers (E-1).

The true sharp and flat symbols (♯ and ♭) may also be used in the name of a note or pitch class - i.e. C♯ D♭ D♯ E♭ F♯ G♭ G♯ A♭ A♯ and B♭ are also valid note ids - but you may find # and b easier to type on most keyboards.

When the octave number is omitted the octave of the corresponding note is determined by various heuristics and context cues. See the comments on octave inference, below, for details.

The notes in the list may be separated by one or more space () or comma (,) characters.

For example, the following tuning descriptions are equivalent:

These delimiters aren't strictly necessary, but they can help the parser understand your intent when the tuning description may otherwise be ambiguous. For example, adding a separator between the tuning for each string may help distinguish a flat-note annotation (Xb) from an independent B note, in the absence of other context cues.

In the absence of an explicit octave indicator, the fretboard tools will make an educated guess about the octave associated with a given pitch class identified in the tuning specification. This inference is based on a number of factors, including:

Fully-specified, scientific-pitch-notation-format octave values can be used to override this logic in the event that the tuning parser fails to guess the appropriate octave. If the doesn't guess the octave you have in mind, simply add an octave number after each note to override the default. For example, if you want to see the fretboard for a guitar tuned one octave lower than normal, enter E1 A1 D2 G2 B2 E3 (rather than simply E A D G B E) to override the default E2 to E4 assumption. (Actually, as described below, the tuning spec E1 A D G B E (or, eliminating spaces, E1ADGBE) is sufficient in this case.)

Note that it is possible to specify an octave for some but not all notes in the tuning. In that case the parser will attempt to infer any unspecified values based on the information that is available. You can use this as a shorthand way to "seed" the octave pattern for tunings that the parser may otherwise mistake. For example the tuning BEADG is typically assumed to indicate a 5-string bass tuned to B0 E1 A1 D2 G2 however you can start the tuning at an arbitrary point by indicating the pitch of the first string (and let the parser fill in the details from there). I.e., the tuning descriptor B1 E A D G will yield B1 E2 A2 D3 G3.

As previously mentioned, note label parsing is case-insensitive in the general case. The descriptor EADGBe is considered equivalent to eadgbe and EADGBE (and EaDgBe and other variations, for that matter).

However, there are a few instances in which the capitalization of note names influences the way in which the parser interprets the tuning. Notably:

Capitalization is also a factor in other octave and instrument-type inference logic.

Also see more posts by Rod or tagged Features, Tools, or Fretboard.
Or, visit the tag index, or view the latest posts.