As it happens this release occurs almost exactly one year — and more than 20 releases — after FATpick's first public release.

You can download the latest version of FATpick from the releases page.

The most obvious change in this release is the addition of the metronome tool. Like the other in-app guitar tools in FATpick the metronome is never more than a couple of clicks away. Find it under the Tools menu: the toolbox icon on the main navigation bar. 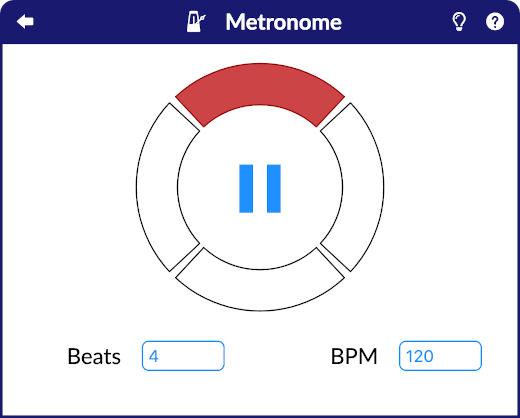 The metronome provides a visual and auditory cue, directly on the beat, for any tempo and any number of beats per bar. It's also got some convenient interactive keyboard controls that make it fun to play with. See this feature post for more details.

Several changes have been made to the track volume and other audio mix controls found on both the track selection and tab player screens.

Some minor corresponding changes were also made to the internal design of the track mix management implementation. You may notice some changes in the quality or volume of backing track audio.

Like the volume settings themselves this "track is muted" state is sticky. Whenever you return to a song you should find the same track audio mix as the last time you played it.

The latest version of FATpick — and a gameplay demo — is available here.

We call FATpick the tab player that listens. It's an animated guitar tablature viewer designed for use with your guitar in hand. Each tab backed by synchronized audio tracks, so you can hear as well as see the song, and practice with a virtual back-up group to flesh out your sound. FATpick listens as you play along with any guitar, giving instant feedback on the accuracy and timing of your performance.

But FATpick is more that that. FATpick is a practice companion for musicians that play guitar, bass, and other plucked-string instruments. It has a bunch of tools for guitarists like a guitar chord database or the metronome added in this release, that are designed to help you make the most of your practice time.

Visit the downloads page to get the most recent version of FATpick, free for a limited time.